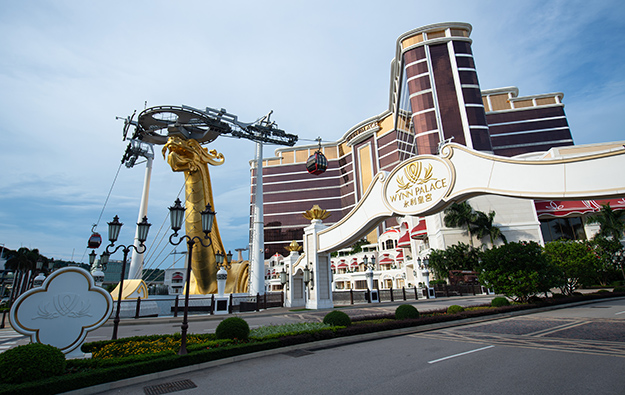 Wynn Macau Ltd says its operating entity in the Macau casino market has been asked by the local government to pay MOP47.0 million (US$5.8 million) in return for a circa six-month extension on its present gaming concession, which is currently due to expire on June 26.

Wynn Macau Ltd – which runs the Wynn Macau casino resort on the city’s peninsula, and Wynn Palace (pictured) in the Cotai district – gave the information in its annual report filed to the Hong Kong Stock Exchange after trading hours on Thursday.

Wynn Macau Ltd said in the latest filing that it had submitted its request for temporary extension on March 11.

It stated it had also been asked by the Macau authorities to provide a bank guarantee “to secure the fulfilment” of Wynn Macau Ltd’s payment obligations towards its employees should the concession-holding unit “be unsuccessful in tendering for a new concession contract after its concession expires”.

Market rival Melco International Development Ltd also said on Thursday that its operating entity in Macau had “filed an application with the Macau government” for the extension of its gaming licence until December 31. Melco International is the parent of U.S.-listed casino operator Melco Resorts and Entertainment Ltd.

In its annual report filed with the Hong Kong Stock Exchange, Melco International said that in connection with the licence extension application, the group “will be required to pay an extension premium” of up to MOP47.0 million and “provide a bank guarantee in favour of the Macau government for the payment of potential labour liabilities” should the group “not be granted a new concession” or have its licence further extended after December 31.

Adriano Marques Ho, director of the local casino regulator, the Gaming Inspection and Coordination Bureau, said on Thursday, on the sidelines of a government press briefing on a bill to cover casino junkets: “The government has already received the applications from the six concessionaires seeking to extend their licences to the end of this year, and the government is now analysing their requests. An announcement for that will be made in due course to the public.”

Wynn Macau Ltd said in its annual report, referring to its ability to stay in the market until December 31 and beyond: “The group is monitoring developments with respect to the Macau government’s concession extension and renewal process, and at this time believes that its concession will be extended and renewed beyond 26 June 2022.”

Macau casino operator Sands China Ltd mentioned in its 2021 report issued recently, it would pay MOP47 million as a condition for its licence to be extended for a further six months, to December 31. It was also asked for a guarantee to cover payments for staff, in the event it did not win a new concession under an eventual new public tender.

Macau is to create distinct zones on its casino floors and designated gambling chips that will be solely for the use of players from overseas. The moves will be part of a new gaming tax system to... END_OF_DOCUMENT_TOKEN_TO_BE_REPLACED