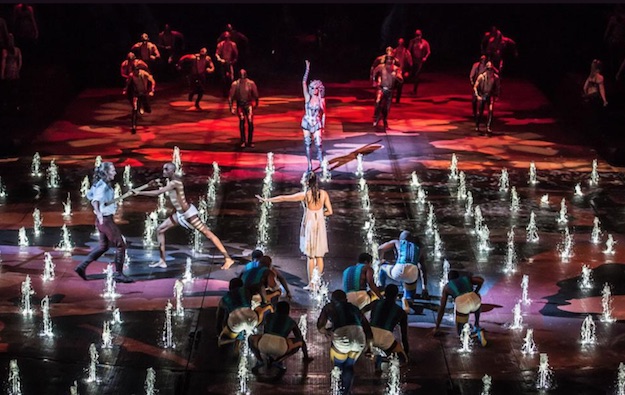 The House of Dancing Water (pictured in a file photo), a hit Macau casino resort show that was suspended ultimately in June 2020 amid the Covid-19 pandemic, is to return to Macau in “late 2024”, says its backer, Macau casino operator Melco Resorts and Entertainment Ltd.

The move is part of the firm’s MOP11.8-billion (US$1.5-billion) spending commitment to the Macau government in return for a new 10-year casino concession, which was signed by Melco Resorts on Friday, along with the contracts of the other five successful bidders.

Of the total pledged by the firm, MOP10.0 billion is for non-gaming activities. From the latter figure, circa MOP4.2 billion is for entertainments, and circa MOP1.9 billion is for developing markets of overseas customers, a policy aim of the local government.

Melco Resorts’ chairman and chief executive, Lawrence Ho Yau Lung, also said – during a Saturday media briefing organised by the government for the six concessionaires to outline their plans – that the firm would creatre an indoor water park, a skate park, a clinic, and a cineplex.

As well as its flagship City of Dreams on Cotai, the group also runs the Altira Macau casino hotel in Taipa, and is majority owner of Studio City on Cotai.

During a question-and-answer session with the media, Mr Ho noted that in the past three years – a period coinciding with the Covid-19 pandemic – his group’s debt had “increased from the original [MOP]30 bilion to over [MOP]56 billion”.

But he added that: “Although the road ahead is tough and we saw our debt increase so much, we are committed to develop the local market.”

In addition to The House of Dancing Water comeback, Melco Resorts says it will revive its plan for residency shows at Studio City, with Aaron Kwok, Leon Lai, and Joey Yung to perform a collective 90 shows at the Studio City Event Center between 2023 and 2025.

An iRad Polyclinic – offering medical diagnostic services including magnetic resonance imaging (MRI), computer tomography scan (CT Scan), 2D and 3D mammography, ultrasound and X-ray services – is expected to open at Studio City in 2024. The group said it would be the “largest private imaging and medical checkup polyclinic” in Macau.

To promote the meetings, incentives, conferences and exhibitions (MICE) segment, Melco Resorts will upgrade its Grand Hyatt Macau meeting and function facilities at City of Dreams.

The group plans also to open in 2023 an upgrade to its Studio City Water Park. It says it will be the “only year-round indoor water park and summer months outdoor water park in Macau”. The facility will cover 9,670 square metres (104,087 sq. feet), and have 16 new attractions.

In 2024, Melco intends to open a skateboard park at Studio City, with the aim of promotingMacau as a “sports friendly city, while attracting additional international family-oriented visitors”. Starting in 2025, the group plans to hold annually an international skateboard competition.

Every year from 2024, Melco will also organise a technology, innovation and sustainability competition open to participants in the Guangdong-Hong Kong-Macau Greater Bay Area, “to address and solve problem statements concerning environmental and technological issues that integrated resorts face”.

Melco Resorts also reiterated it would build a cineplex at Studio City, as it had previously mentioned. It will have six theatres, one IMAX theatre, and five director’s club theatres and is expected to open in 2024.

International casino operator Las Vegas Sands Corp has been ranked as the most sustainable firm in the global casino sector, according to the 2023 edition of the S&P Global Sustainability... END_OF_DOCUMENT_TOKEN_TO_BE_REPLACED