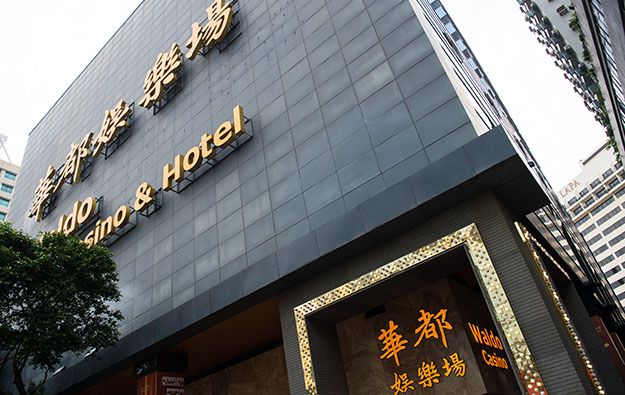 Waldo Casino, a Macau satellite operation at Waldo Casino and Hotel (pictured) using Galaxy Entertainment Group Ltd’s licence, “will remain in operation until the end of this year,” said a representative of the casino group in a message to GGRAsia on Friday night.

The previous day, Galaxy Entertainment had said it was “in talks with the related partner to evaluate the situation”.

The latest statement did not clarify whether the current Waldo management would continue to year-end, or whether Galaxy Entertainment would take over, in the manner that SJM Holdings Ltd is due to take over gaming at Grand Emperor Hotel, one of its satellites.

Waldo Casino and Hotel is located in Macau’s downtown district.

In the Macau market, satellites are usually hotel casinos involving third party investors, but which run gaming under a service agreement with one of Macau’s casino licensees.

The current six Macau concessions will expire this year, and no new concessions have yet been awarded to cover the period from 2023 onward.

Up to this week, Galaxy Entertainment had been in partnership with promoters at three satellite properties, with the venues being branded collectively by the licensee as City Clubs.

In the early hours of Thursday, Galaxy Entertainment had confirmed to GGRAsia that the other City Clubs – President Casino and Rio Casino, also in Macau’s downtown district – had ceased operation from the end of Wednesday (June 15).

Galaxy Entertainment had said in its first quarter unaudited results highlights, filed on May 12, that the three City Clubs contributed only HKD8 million (US$1.0 million) of group adjusted earnings before interest, taxation, depreciation and amortisation (EBITDA) in the period, down 20 percent year-on-year, and down 68 percent quarter-on-quarter.

On Friday, a half-page advert appeared in Chinese-language newspaper Macao Daily News, in the name of an entity called Rio Holdings Ltd.

It made a complaint – without naming Galaxy Entertainment – about the circumstances leading to the closure of Rio Casino.

The advert on behalf of Rio Holdings claimed: “Throughout the process, the concession company had never negotiated with the company about cooperation after the renewal of the [gaming] concession, as well as had never proposed the continuation of operation by leasing the venue.”

The reference to “concession renewal” was understood to relate to an extension of the current concessions or sub-concessions of the six Macau casino operators. They had been due to expire on June 26, but the city’s government has invited the operators to apply to extend them until the end of the calendar year, as the Macau authorities work to prepare a fresh public tender process. The Portuguese-language radio service of Macau public broadcaster TDM reported on Tuesday – citing its own unnamed sources – that extension contracts would be signed with the Macau government on June 23.

The gaming operator added: “Talks on discontinuing the cooperation between the two parties began several months ago, and the mutual agreement to cease operation of the Rio Casino was not affected by the new arrangements for satellite casinos.”

That was understood to be a reference to a new regulatory framework for Macau satellites, as part of a general overhaul of Macau gaming regulation, that is currently being steered through the city’s Legislative Assembly.

Galaxy Entertainment also addressed what it described as a “rumour” – one that had already been denied by those placing the newspaper advert. This was that the third-party investor in the Rio Hotel had somehow been asking for too much rent from Galaxy Entertainment, and that this had been a blockage in reaching agreement to continue gaming there.

Neither side had clarified from where such rumours stemmed. But Galaxy Entertainment nonetheless said in its Friday statement: “It is… not true that the landlord was demanding a high amount of rent as the rumours say.”

Hong Kong-listed Wynn Macau Ltd says it will inject nearly MOP4.80 billion (US$596.4 million) into Wynn Resorts (Macau) SA. That is in order to comply with Macau’s revised gaming law and the... END_OF_DOCUMENT_TOKEN_TO_BE_REPLACED