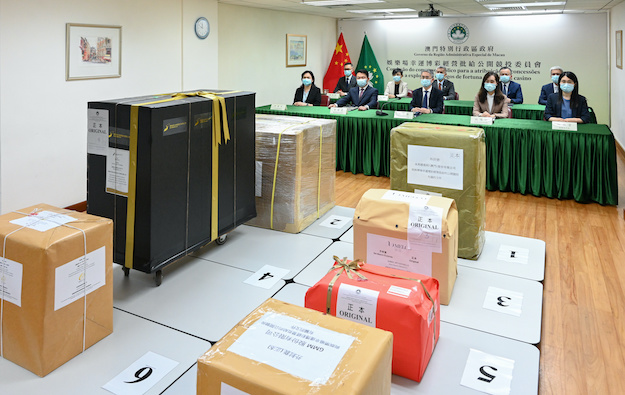 The proposal for a Macau gaming concession submitted by GMM Ltd, an indirect unit of Genting Malaysia Bhd, has been only “conditionally accepted” by the Macau government committee overseeing the process, it was announced on Friday.

The proposals of the six incumbent Macau operators were all accepted without mention of any condition.

Friday’s announcement on behalf of the Committee for Public Tendering of Concessions for the Operation of Casino Games of Fortune, came after a formal opening process for all seven submissions (pictured), following the paperwork being presented by a Wednesday deadline.

The government’s Friday announcement did not say why GMM’s bid was only conditionally accepted, or what the company would need to do to achieve unconditional acceptance.

Speaking to reporters on Friday before the opening of the proposals, André Cheong Weng Chon, Macau’s Secretary for Administration and Justice, said that after the opening of the bidding documents, the committee would assess the specific contents of each proposal and engage in negotiations with each of the accepted bidders.

Mr Cheong is also the chairman of the committee overseeing the public tender. He stated it was expected that the whole vetting process and the granting of new gaming concessions would be completed before the end of the year.

Investment analysts have said they anticipate the successful bidders will be selected by November or December.

The government has stated it aims to have up to six, 10-year new concessions, starting from January 1, 2023.

Macau’s casino gross gaming revenue (GGR) for the first five days of February is estimated at MOP1.9 billion (US$235.1 million) – or MOP380 million per day – a level that suggests a “45... END_OF_DOCUMENT_TOKEN_TO_BE_REPLACED