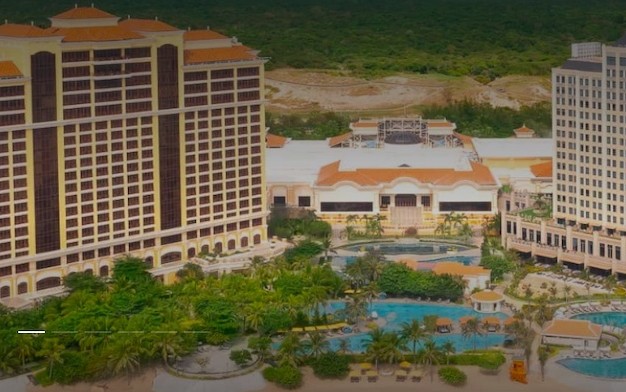 The new airport – due to finished by 2025 – will be at Long Thanh, about 78 kilometres (49 miles) northwest of the Ho Tram Strip, compared to the current air hub, which is north of Ho Chi Minh City’s centre, and about 112 kilometres from Ho Tram.

Mr Power, of Ho Tram Project Co Ltd, which operates a foreigner-only casino at the centre of its beachside holiday resort, as well as a golf course designed by Greg Norman, said the benefit of the new airport should be “dramatic”.

He stated: “The dramatic impact it will have on Ho Tram, is that the drive time from the current airport is about 2.5 hours.”

He added the new one would be “less than one hour” by road from Ho Tram. “It’s halfway between Ho Chi Minh [City] and Ho Tram,” Mr Power noted.

Two other Vietnam casino resorts competing for foreign-tourist spending: Hoiana at Da Nang on the country’s central coast; and Corona Resort and Casino on the southern holiday island of Phu Quoc – the latter also part of a pilot scheme to let economically-qualified locals gamble – are “about 40 minutes” from their respective nearest airports, stated Mr Power.

The new airport at Ho Chi Minh City “makes us in the ball park” in terms of The Grand Ho Tram Strip being competitive, he said.

“In my opinion location, accessibility, are the most important things regarding competitive advantages,” he added.

The Grand Ho Tram Strip’s casino is not currently able to serve local players. But Mr Power noted Ho Chi Minh City was a hub not only for Vietnamese holding a foreign passport – and therefore entitled to take part in gaming – but also had a foreign expatriate business community, including people from South Korea.

“We are actively involved with the Korean Chamber of Commerce,” locally. “We support them. Another group is called the Korean Association,” said Mr Power.

“The management team at Ho Tram personally reach out to those folks, we invite them to our property,” he added.

Mr Power was asked about the recent introduction of the global hotel brands InterContinental and Holiday Inn to the accommodation offer at the complex.

He said: “People realised that it’s not only about casinos at Ho Tram. It’s about the beach, it’s about the hotel rooms, the restaurants, the golf course, the bowling alley, the movie theatres: it’s about the other activities we have at the property.

“So it sends the message we are a true integrated resort going after all [consumer] markets.”

Several marketing professionals recently told GGRAsia that regional casino projects were likely to be competing for high roller players from outside China, including South Korea, amid a sharp decline in the Chinese VIP segment globally.

GGRAsia asked Mr Power whether its complex had currently any junket business.

He stated: “We have multiple junkets/ITOs as we call them here. We have two Korean junkets working with us.” In the Vietnam casino market, the term “international tour operator” or “ITO” can be synonymous with junket.

Asked about the types of Vietnam-based foreign player attending the resort’s casino, Mr Power stated they were “mostly mass and premium mass”.

He added: “Historically, people described premium mass as if it were something unique. As far as I’m concerned, it’s a continuum.

“For me, premium mass just means those folks that have a higher average bet than other folks.”

He noted: “We treat all customers” with the same care. “We want everyone to have a great time.”

Regarding the resort’s slot machine and electronic table game offer, Mr Power said: “We recently upgraded part of our slot machine floor at Ho Tram, and we have seen a tremendous acceptance of those new machines.”

But he also observed: “There are multiple gaming [machine] parlours in Ho Chi Minh City, which have the latest and the greatest technology – in terms of new machines – in the industry.”

Given the relative proximity of the resort to that metropolis, “even though we are finding tremendous success with our new [electronic] product, I think we want to focus on table games, because there are no live table games in Ho Chi Minh [City],” he said.

Mr Power suggested to GGRAsia that not being able currently to offer gambling to locals, should not be a barrier to the growth of the property’s appeal.

Regarding Vietnam’s locals’ pilot programme, which was extended for existing participating venues, amid the Covid-19 disruptions, the resort CEO stated: “We are certainly in discussions with the government, and if they do decide to expand it – for whatever reason – we are more than happy to join that pilot programme and we have communicated that to them.”

Spectrum Gaming Group LLC, a specialist consultancy on probity and legal compliance in the regulated casino sector, has issued its “Top Ten Trends To Watch for 2023”, including likely events in... END_OF_DOCUMENT_TOKEN_TO_BE_REPLACED