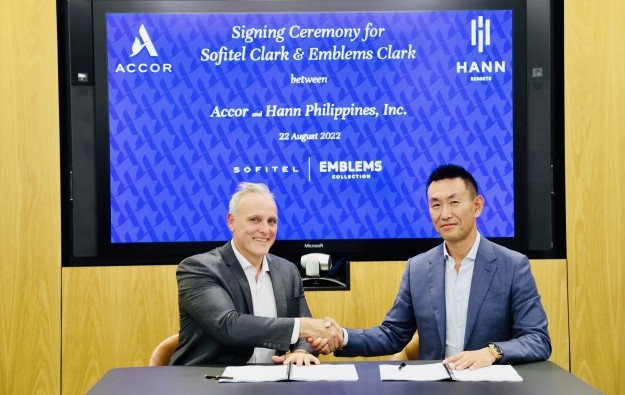 Hann Lux Lifestyle Resort, a development complementary to Hann Casino and Resort at Clark, in the Philippines, is to offer two luxury hotel brands of French hospitality group Accor SA.

Garth Simmons (pictured left), chief executive for Accor, Southeast Asia, Japan and South Korea; and Daesik Han (pictured right), chairman and CEO of Hann Philippines Inc, the promoter of Hann Lux and of the casino complex; signed on Monday a deal to bring the hotel marques to Clark, a growing casino destination.

Hann Casino and Resort had in early March a soft opening for 270 rooms of another Accor hospitality brand, Swissôtel. That hotel will eventually have an aggregate of 372 rooms available later this year, according to Hann Resorts’ corporate materials.

“We are excited to expand our partnership… with Accor, a global leader in the hospitality industry,” said Mr Han, as cited in a Tuesday press release about Monday’s deal signing.

Mr Han was also cited as stating: “Having Sofitel Clark and Emblems Clark in Hann Lux will surely make it a celebrated destination,” attracting clients “not only from all over the Philippines but also from around the world”.

The hotel group’s Mr Simmons described the arrangement as a “landmark multi-agreement signing,” that “reaffirms the trust and confidence” Hann Philippines “place in Accor”.

The release did not mention the timetable for launching Sofitel Clark and Emblems Clark.

Hann Casino and Resort’s operator had said in 2020 that the Mercure-brand accommodation would be introduced at that property, as part of the rebranding exercise of the whole casino resort complex from the former Widus Hotel and Casino. The revamped Hann Casino and Resort had a soft opening in December.

A Banyan Tree and an Angsana property would eventually be part of a development called Hann Reserve in a part of Clark known as New Clark City.

“We are excited to expand our partnership further with Accor a global leader in the hospitality industry. We are pleased to offer our guests the best of French and Korean lifestyles,” said Mr Han in prepared remarks, included in the Tuesday release.

FBM, a maker of casino slot machines and an international specialist in electronic bingo machines, is to launch its “Jin Qián Link” slot product at Global Gaming Expo (G2E) 2022 at the Venetian... END_OF_DOCUMENT_TOKEN_TO_BE_REPLACED