Macau casinos to remain shut for an extra 5 days 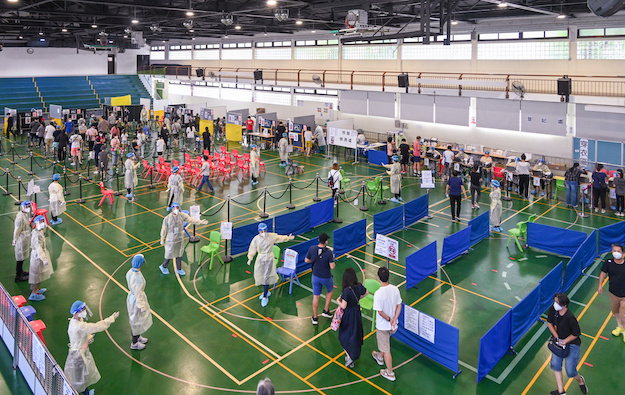 Macau’s casinos will remain closed temporarily for an additional five days, as the government announced on Saturday that a pause to all non-essential business venues in the city would be extended to the end of Friday, July 22.

All of the city’s non-essential businesses – including casinos – have been shut since July 11, as a Covid-19 countermeasure. Under the partial lockdown, residents are also banned from leaving their homes unless for what is deemed a valid reason, such as buying groceries.

Macau had a total of 1,706 confirmed Covid-19 cases as of midnight on Friday, in the current local outbreak since June 18. A total of 31 new infections was detected on Friday, according to the local health authorities.

The city’s authorities have conducted so far 10 rounds of Covid-19 community nucleic acid testing (pictured) since a current testing programme started on June 19. A number of large gaming-resort hotels in Macau are being made available for quarantine purposes.

A number of the city’s non-gaming entertainment venues, including cinemas, amusements parks and spas, have been closed since June 23. Outdoor leisure areas, such as parks, gardens and beaches, are also shut, while restaurant dining-in has been temporarily banned, with only takeaway sales allowed.

Macau casino gross gaming revenue (GGR) fell to its lowest monthly tally this year in June – and the lowest since September 2020. It amounted to MOP2.48 billion (US$306.8 million), equivalent to a daily average rate of MOP82.6 million.

Brokerage JP Morgan Securities (Asia Pacific) Ltd said in a separate note on Monday that third-quarter Macau casino GGR was at risk due to the ongoing community outbreak of Covid-19. It added that, due to such expected decline, it was “worth revisiting” its liquidity analysis for the city’s six operators “under a zero-revenue environment”.

While a credit downgrade might eventually happen, Aras Poon, an associate director of S&P Global, said that a “default scenario” for Macau casino operators seemed “less likely in the next two years,” because debt maturities for the companies were “really spread out to the long term”.

The imminent return of package tours from mainland China will not only help boost Macau’s tourism businesses, but is also expected to help casinos gain more foot traffic in their mass gaming... END_OF_DOCUMENT_TOKEN_TO_BE_REPLACED