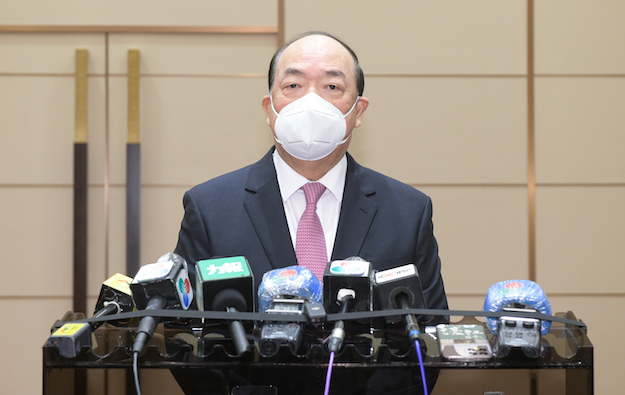 The Macau government is, “for now”, keeping its estimate for the city’s 2023 casino gross gaming revenue (GGR) “unchanged” at MOP130 billion (US$16.08 billion). The forecast, announced during November’s discussion in Macau’s Legislative Assembly of the 2023 fiscal year budget proposal, was reaffirmed on Thursday by the head of the local government, Ho Iat Seng (pictured).

Speaking to reporters on the sidelines of a public event, Mr Ho acknowledged that Macau had seen a rebound in tourist arrivals and an increase in economic activity after the city cancelled from Sunday (January 8) most of its travel restrictions related to the Covid-19 pandemic. The cancelled controls included dropping all testing requirements for inbound travellers from mainland China, Hong Kong and Taiwan.

The Macau chief executive noted however that to achieve the government’s forecast of annual MOP130-billion GGR, the city’s casino needed to record average monthly GGR of more than MOP10 billion.

For full-year 2022, Macau’s GGR fell by 51.4 percent year-on-year to MOP42.20 billion, coinciding with travel and other restrictions applied for most of the year up to mid-December, under China’s now-discontinued ‘zero-Covid’ policy. The year 2022 closed with December GGR of MOP3.48 billion.

In his Thursday comments to media, Mr Ho also stated that the Macau authorities were in close communication with their mainland counterparts regarding the resumption of package tours from mainland China to Macau. He said a return of tour groups was likely to happen soon after the current peak in Covid-19 infections in mainland China was brought under control.

The Macau authorities and their mainland counterparts have been discussing details for the gradual resumption of group tours. Initially such groups would be from the provinces of Guangdong, Zhejiang, Jiangsu and Fujian, and the city of Shanghai.

Some Macau casinos visited by GGRAsia on Thursday, actually had tables that were closed, notwithstanding strong consumer demand during Chinese New Year (CNY). The reasons for some tables being... END_OF_DOCUMENT_TOKEN_TO_BE_REPLACED