Macau police built own case on Chau, not tied to Wenzhou 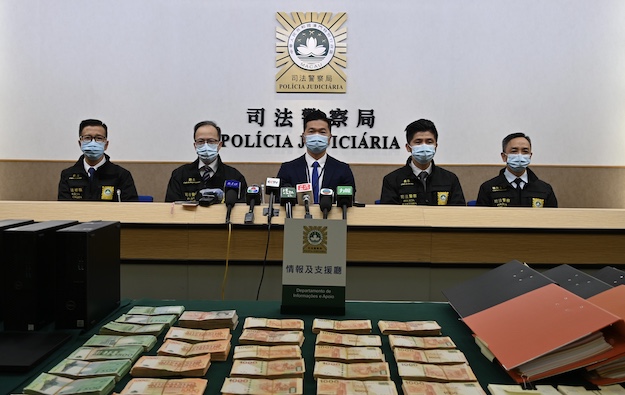 Chong Kam Leong, a Macau Judiciary Police spokesman, outlined during a Sunday press conference, that the authorities in the Chinese casino hub had built their own criminal-gambling case dating back to 2019 against gambling junket boss Alvin Chau Cheok Wa, and that it was not tied to the probe and arrest warrant issued for him on Friday by Wenzhou city on the mainland.

The Macau police had no information at hand regarding the Wenzhou case against Mr Chau and his alleged associates, said Mr Chong (pictured, centre).

The city’s Judiciary Police had built a dossier “by collecting our own intelligence, and exchanging information with law enforcement units worldwide,” said Mr Chong.

Displayed during the press conference, was the equivalent of about US$385,000 (see slideshow at the bottom of this story) in Hong Kong and Macau money, as well as ledgers and various computer equipment said to be connected to illicit activities. After the press conference, Mr Chau – who had been detained in Macau on Saturday – and 10 other suspects were transferred under escort, away from the Judiciary Police headquarters in downtown Macau.

Via intelligence gathered by the Macau authorities since August 2019, the force believed “a criminal group led by a Mr Chau” had “made use of the VIP gaming business they operated in Macau to establish a gambling platform overseas, and solicited mainland Chinese citizens for illicit gambling activities”.

Police spokesman Mr Chong added: “The group had made use of their VIP gaming room accounts and underground banks for transferring and hiding their illicit gains.”

He added: “As such, our bureau has established a case on that in April 2020, and continued investigations in depth.”

The police spokesman further noted, referring to police enforcement action in two different districts of Macau: “Upon reaching a mature stage in our investigation work, our bureau has, during the early morning hours of November 27, 2021, successfully detained 11 suspects from several units in a commercial building in ZAPE, as well as from a residential unit in Coloane.”

When asked by GGRAsia whether 10 people described by the police as “senior administrators” also facing accusations alongside Mr Chau, had any link with the junket brand Suncity Group, Mr Chong said: “These senior administrators were the senior management members of the criminal group.”

Mr Chong added: “During our initial round of questioning, each one of them [the suspects] has admitted the establishing of gambling platforms overseas, and running proxy gambling. But they refused to cooperate on the other aspects of this case.”

Proxy gambling typically involves a gambling customer not physically present in a bricks and mortar casino, giving bet-placement instructions via telephone or digital device, to a person or “proxy” that is actually present at a live-dealer table in a casino. Proxy gambling is not permitted in the Macau market, according to a long-standing instruction from the city’s gaming regulator.

The Judiciary Police spokesman added: “Our bureau will, later, send these people to the Public Prosecutor’s Office on charges of forming a criminal group, money laundering, and illicit gambling.”

He added: “Our bureau will continue to investigate the case in depth, and pursue other people,” that might be “on the run”.

Casino equipment supplier Sega Sammy Creation Inc said in a Friday release it was debuting its Genesis Crest 43J cabinet in Asia. The product will be available at an in-person trade show, G2E Asia:... END_OF_DOCUMENT_TOKEN_TO_BE_REPLACED