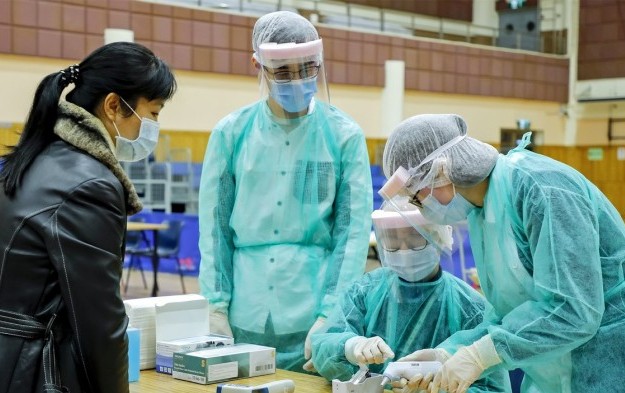 The tally of visitor arrivals to Macau in February 2020 “plunged” by 95.6 percent year-on-year to 156,394, said on Friday the city’s Statistics and Census Service.

The dramatic decline was influenced by “the ongoing epidemic of the novel coronavirus pneumonia,” said the government body, referring to the Covid-19 pandemic that this week saw Macau ban all travellers from overseas and impose a 14-day quarantine on all residents returning to the city.

The average length of stay of visitors went up by 1.8 days to 2.8 days. The statistics bureau said that was attributable to “a longer stay of mainland [China] visitors that took up the majority of total visitor arrivals”.

Another contributing factor was the growth in the proportion of overnight visitors – accounting for 54.9 percent – among the visitors from the Chinese mainland.

The average duration of stay specifically in relation to overnight visitors, “surged” from 2.1 days in February 2019 to 5.4 days this February; while that for same-day visitors dropped from 0.2 day to 0.1 day.

Visitor numbers from the mainland plummeted by 97.2 percent year-on-year in February to 72,307, with arrivals under the Individual Visit Scheme – an aggregate of 5,822 entries – shrinking by 99.6 percent.

Arrivals from the nine cities in Guangdong province that are part of the Guangdong-Hong Kong-Macau Greater Bay Area – a Chinese central government initiative to link more closely the people and economies of those places – saw a decline of 97.6 percent, to 23,907 last month. The visitor tally from Hong Kong and Taiwan receded by 90.5 percent and 92.8 percent respectively, to 62,489 and 5,967 respectively.

Visitor arrivals from the United States and Canada both slipped by more than 80 percent, to 1,262 and 880 respectively.

In the first two months of 2020, visitor arrivals totalled just over 3 million, a decline of 56.9 percent year-on-year. Same-day visitors – at 1.61 million – and the 1.39-million overnight visitors decreased by 57.8 percent and 55.7 percent respectively.

For January and February combined, the average length of stay of visitors increased by 0.2 day year-on-year to 1.3 days, with that of overnight visitors – at 2.5 days – rising by 0.4 day while that of same-day visitors – at 0.2 day – staying unchanged.

Analysed by country or place of origin, the January and February tally of visitors from mainland China – at 2.20 million – Hong Kong and Taiwan fell by 56.5 percent, 54.8 percent and 54.9 percent respectively.

On Wednesday this week – amid the recording of a number of imported cases of Covid-19 infection from people travelling respectively from either Portugal, Spain, the United Kingdom, Indonesia or the Philippines – Macau closed, for an unspecified period, its borders to all foreign visitors, and then on Thursday shut its boundary even to all registered non-resident workers not currently in the city. Both measures exempted people that reside either in mainland China, Hong Kong or Taiwan.

Bloomberry Resorts Corp wants to build a third casino resort on the Philippines’ main island, Luzon. It would be at Paniman, a coastal community in Cavite, about 66 kilometres (41 miles) southwest... END_OF_DOCUMENT_TOKEN_TO_BE_REPLACED