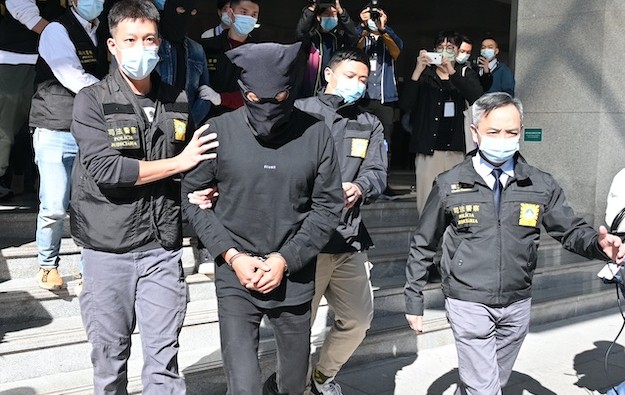 Detained junket boss Alvin Chau Cheok Wa has been placed in pre-trial detention in Macau, following a decision by a local judge. That was after a recommendation by the city’s Public Prosecutions Office, reported respectively the Chinese-language radio service of public broadcaster TDM, and Macao Daily News, the city’s largest-circulation Chinese-language newspaper.

Mr Chau was moved at about 6am on Monday (November 29) to the Correctional Services Bureau’s prison facility at Coloane in Macau, for pre-trial detention, said separately the broadcaster and the newspaper, citing sources neither named.

The news outlets stated that Mr Chau – pictured here on his transfer on Sunday out of the Judiciary Police headquarters in downtown Macau – had been questioned for 14 hours overnight, on suspicion of being a member of a criminal group, of illegal gambling, and of money laundering.

The Judiciary Police said at a press conference on Sunday that they had built their own case against Mr Chau – best-known as boss of the Suncity Group brand of casino junkets – independent of an investigation by the authorities in the mainland city of Wenzhou.

The latter announced on Friday they had an arrest warrant out on Mr Chau for alleged involvement in “cross-border gambling” and “establishing casino” in mainland China.

Macau’s casino gross gaming revenue (GGR) for the first five days of February is estimated at MOP1.9 billion (US$235.1 million) – or MOP380 million per day – a level that suggests a “45... END_OF_DOCUMENT_TOKEN_TO_BE_REPLACED