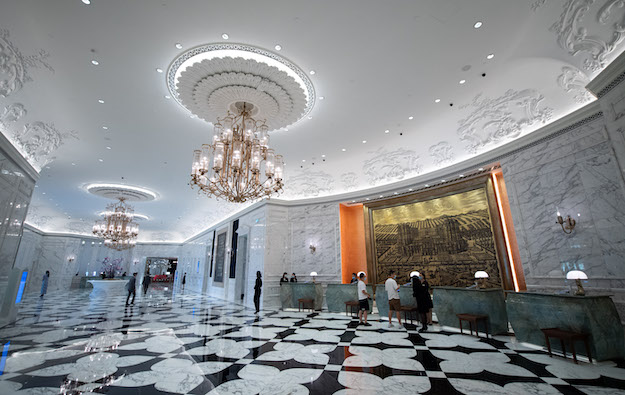 Macau casino operator SJM Holdings Ltd plans to boost by circa 40 percent the number of rooms at its Cotai resort Grand Lisboa Palace (pictured) in time for the Chinese New Year (CNY) holiday that starts on Saturday for mainland Chinese; pushing the total available to 692, said Goldman Sachs (Asia) LLC in a Monday note.

The investment bank cited commentary from the firm, after the institution talked to management at SJM Holdings last week.

“By the end of the second quarter in 2023, it [SJM Holdings] targets to fully open the two Grand Lisboa Palace Hotel towers with a total of 1,350 rooms and may also consider launching the premium Palazzo Versace Hotel if the market conditions are supportive,” the note stated.

The management for Grand Lisboa Palace was also looking to launch additional amenities, including more shops, as well as increasing the property’s gaming table count from “158 to 250”, the Goldman Sachs analysts stated. They did not clarify the details of such an increase.

SJM Holdings, in common with its five Macau gaming concessionaire peers, started a new, 10-year concession on January 1. In return for its Macau rights, the company has pledged a total investment of MOP14.03 billion, according to its concession contract.

Out of that, SJM Holdings said it planned to spend MOP12.0 billion on a combination of developing customer-source markets outside China, and on developing non-gaming projects. The non-gaming capital commitment is split evenly between operating expenditure and capital expenditure, noted Goldman Sachs, citing the casino operator’s remarks in a corporate-day discussion.

Of “SJM’s MOP12-billion capital commitment for non-gaming, about half, or MOP6 billion, is capital expenditure including the upgrade/revamp of Grand Lisboa/Hotel Lisboa; MOP2 billion to be incurred by its parent company which owns Hotel Lisboa,” the analysts wrote.

The Goldman Sachs analysts added: “It [SJM Holdings] will spend the remainder to host non-gaming events and develop a database of international players. These look manageable [targets], representing no more than what it was spending in capital expenditure/operating expenditure before the pandemic.”

Some Macau casinos visited by GGRAsia on Thursday, actually had tables that were closed, notwithstanding strong consumer demand during Chinese New Year (CNY). The reasons for some tables being... END_OF_DOCUMENT_TOKEN_TO_BE_REPLACED