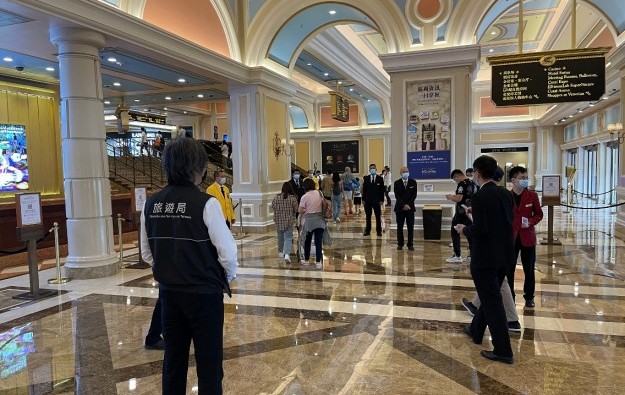 Just over 71 percent of the minimum US$3.8-billion spending that Sands China Ltd has pledged in Macau over the next 10 years, as a condition of getting a fresh gaming concession there, will go on capital commitments for infrastructure, according to a presentation issued by the parent Las Vegas Sands Corp. The new concession period began on January 1 and runs to the end of 2032.

The parent’s document, issued at the time of the group fourth-quarter earnings announcement, stated US$2.7 billion of the minimum amount would go on items including meetings, incentives, conferences and exhibitions (MICE).

The group announced plans for a new, approximately 18,000-square-metre (193,750-sq-feet) facility for conventions and exhibitions, including the development of a “podium adjacent to the [Cotai] Expo” at the group’s flagship Cotai property, the Venetian Macao (pictured in  file photo).

Capital would also go toward “themed attractions including a new garden-themed attraction in the current Le Jardin,” next to the Londoner Macao property on Cotai; “investment in upgrades in MICE and entertainment facilities” across its Macau business; and “investment in new food and beverage and health and wellness amenities”.

The balance of the total minimum investment pledged by Sands China to the Macau authorities – amounting to US$1.1 billion – would be operating expenses relating to: increasing international visitor volume “including MICE” clients; sporting events; entertainment, arts and culture; and “community tourism”.

The above items were all on the Macau government’s shopping list among steps it wished Macau’s six casino operators to take, in order to diversify Macau’s tourism industry offers, and the city’s economy as a whole. Community tourism is understood by the industry to refer to efforts to help spread the economic benefits of Macau tourism to districts other than the World Heritage-listed historic centre, and the Cotai casino district.

The group also said it would develop a “comprehensive overseas marketing strategy” to expand its reach to overseas markets and increase Sands China’s network of international sales offices in Asia, the United States and Europe.

Macau has mandated distinct zones on its casino floors and designated gambling chips solely for the use of players from overseas. The moves will be part of a new gaming tax system that came into effect on January 1, whereby casino operators can be exempted – at the Chief Executive’s discretion – up to 5 percentage points of the 40 percent government levy on gross gaming revenue (GGR). Operators will need to apply, if they wish to seek a percentage exemption on such tax.

The six Macau operators have as a whole pledged to the government to spend in aggregate a minimum of MOP108.7 billion (US$13.5 billion) on non-gaming and exploring overseas-customer markets during the fresh concessions.

Collectively they will have to increase their pledged concession-related investment for the next decade by as much as 20 percent if citywide annual GGR reaches MOP180 billion. That is according to information disclosed by each of the companies via filings to the Hong Kong Stock Exchange.

In Sands China’s case, that would be an additional circa US$700 million over the decade of the new concession, it was confirmed in Wednesday’s earnings presentation.

Also in the presentation deck, the group said the 6,000-seat arena at The Londoner Macao casino resort is set to open “by June 2023″, alongside additional restaurants and “London-themed attractions”.

Some Macau casinos visited by GGRAsia on Thursday, actually had tables that were closed, notwithstanding strong consumer demand during Chinese New Year (CNY). The reasons for some tables being... END_OF_DOCUMENT_TOKEN_TO_BE_REPLACED